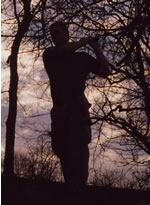 A champion has control. Emotional and mental control of the situation at hand. A champion knows the only thing he has 100% control over is himself. He knows he can’t control how his opponents play, the weather, the course conditions, how the ball flies, how the ball bounces, and the past or future.

A champion steps up to the first tee and can look any opponent in the eye feeling that if he plays his game, his way, flawlessly, he will be the victor. A champion has a game plan, sticks to his game plan, and executes his game plan to the very best of his ability.

Any opponent knows he will have to go out and play every shot, every day with clear focus. This fact eliminates many of the champion’s opponents before they even tee off.

A champion is intimidating without even trying to be.

A champion staggers his opponents with unflappable concentration and focus and the unrelenting will and desire to win.

The champion crushes opponents with a fearless attack that does not fade until the last putt is holed.

A champion finishes the race.